My next purchase was a van I spotted on German Ebay. The price of Westfalia Campers had started to rise for a number of reasons. Firstly it appeared they had gained in popularity in Germany. Secondly the Euro was getting stronger against the Pound. And thirdly I think that so many had been exported to the UK there wasn’t as many available to buy in Germany !

Because the price of Westfalia Campers was high I started looking if anything else interesting was available and came across this VW T3 Westfalia Magnum Multivan. Whilst not a camper in the true sense (no cooker or sink) the Multivan was a very versatile bus having a full width rock n roll bed, buddy seat with storage underneath and a fold out table. The Magnum was a special edition van that came with power steering, big bumpers, side planks, square double headlights and removable fridge.

I had a chat via email with the seller and a couple of weeks later I was on my way to Berlin to pick it up. Got a bit worried when I had been waiting in deep snow outside the train station for half an hour and the seller hadn’t arrived but turned out the train station had two entrances and he was at the other entrance wondering where I was 😉

Also had a nerve racking drive back as Berlin was 750 km from the ferry port and due to delays we made the ferry with five minutes to spare !

The van was in great condition and was only being sold due to new emission laws in Germany meaning that it could not be driven into the city making it impractical for its current owner ;-( 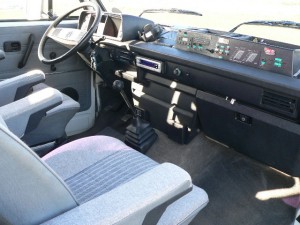 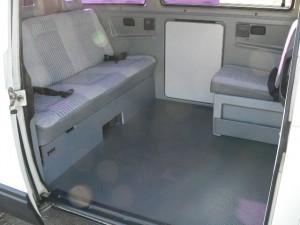 A previous owner had obviously been an electronics enthusiast as sat on the dash was a console that looked like something out of the KITT car in the Knight Rider series. One nice extra on this van was a Webasto heater that actually heated the water in the vans engine, so hot air came out of the normal air vents. This could be set by timer to come on at a certain time in the morning so you could have your breakfast and then get in the van and it was already warm with windows demisted – how cool is that 😉