Added downloads of two adverts for Autosleeper motorhomes from May 1994 to the  VW T4 Transporter Autosleeper Downloads Page . 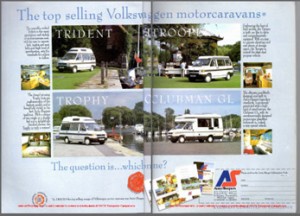 The second advert featured the Autosleeper VW T4 Trophy. At the time there was no long wheel base version (LWB)  of the T4 available so Autosleeper came up with a radical design to add a fibreglass rear end to the camper enabling them to fit a bathroom including WC, washbasin and  shower into the vehicle ! Eventually when VW released a LWB version of the T4 the Trophy was replaced with the Autosleeper Topaz model. The Topaz is basically the same the layout but built into the VW T4 LWB factory vehicle. 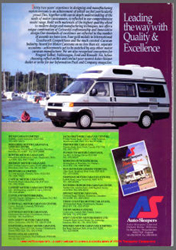