These were the first campers Autohomes built on the newly released VW T4 platform. The layout of both was the same but they had different roofs. The Koncord was a 4 berth with a bed in the hightop roof and the Kompact was a 2 berth with a lower profile hightop roof with storage inside. The Koncord roof had a roof rack on top and the Kompact had a rear roof locker with fibreglass lid both accessed via a rear tailgate ladder.

One nice design feature was that the rear seat and cupboards could easily be removed giving extra load area making it a versatile vehicle when not being used for camping. 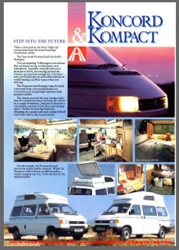