Built by a Dutch company called Eurec using parts supplied by Devon the Eurec Cassandra was basically a left hand drive Devon Moonraker. The Eurec Cassandra was sold to customers in Europe including Netherlands, France, Germany and Austria. Initially it was only available with a Devon side elevating “Double Top” pop top roof. On later models it was also possible to specify a high top fixed roof option. The new webpage contains information about this model and downloads of sales brochures for the VW T25 / T3 Eurec Cassandra. 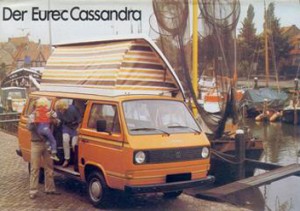