The next camper I bought was a 1987 VW T25 / T3 Westfalia Joker Poptop 1.6TD camper. It was the first Poptop camper I had bought although to be honest it didn’t feel any different to drive than a hightop.

People often ask me whether I prefer poptop campers or hightop campers. People tend to have very strong views on the subject and depending on your circumstances one version may suit you better that the other. The poptop may suit you if you need to access car parks with height limits, may be more stable in high winds (although in my experience I didn’t notice much difference), may be cooler to sleep in if staying in hot climates and I would say some people prefer the look of the van when the poptop is lowered than a hightop. I personally prefer hightop vans as I mainly camp in the UK. I find the poptops tend to have damp issues relating to the canvas and rear roof areas, as when roof is lowered damp gets trapped in the roof and if not aired regularly mould spores can form. The hightop offers better insulation than a raised poptop although to be fair you can buy insulated screens to cover the poptop canvas if camping in cold conditions. The main reason I prefer the hightop though is that you get a lot of extra storage and after a nights camping you can just throw your bedding etc in the hightop, make your breakfast and move on whereas in a poptop everything would need to be stowed first and the roof lowered before you can move on. 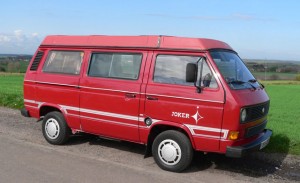 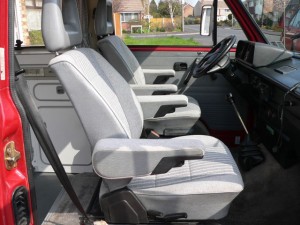 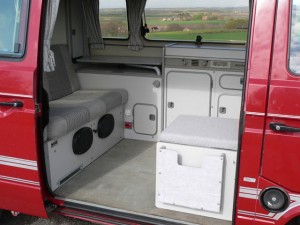 The camper had a couple of aftermarket additions including smaller nicer steering wheel, large “elephant ear” mirrors that were originally fitted on the “syncro” 4 wheel drive models. Also on the rear buddy seat box the previous owner had added a “magazine” rack which I think was a good idea.