Added a download of a Nov 1994 VW T4 Transporter Autohomes Kamper and Autohomes Komet Sales Brochure to the VW T4 Autohomes Downloads Page.  Not to be confused with the earlier VW T25 models with the same names. The VW T4 Autohomes Kamper and Komet were very similar other than the Komet came with extra equipment as standard such as blown air heating, swivel on drivers seat, adjustable arm rests, porta loo, crockery set and occasional two person table. They were also available in either red or blue as well as the usual white 😉 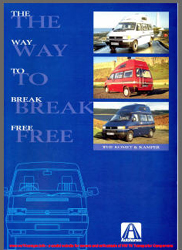