Circa 1996 Richard Holdsworth Conversions ran into financial difficulties and was taken over by John Cockburn. The new company now called Cockburn Holdsworth released new versions of the VW T4 Holdsworth Villa and Vista models.  They were similar in design to the earlier VW T4 Holdsworth models but with updated upholstery and improved design and specification. Production appears to have stopped circa 1997 so they were only produced for a short period. 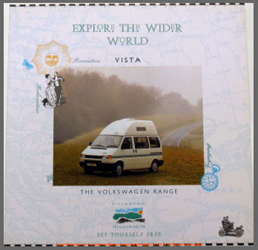